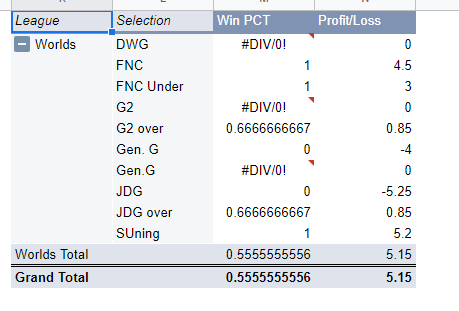 Here we are, two more weeks of LoL. It’s bittersweet. In some ways, I’m ready to think about something else for a stretch, in other ways it’s hard to say goodbye when I finally feel like I’ve got a good grasp on things. There will always be next season to improve on.

Before we get there though, let’s look at our first Semi-final of the weekend:

I have a feeling that there are going to be a lot of people who believe this matchup is pretty close and are therefore taking the plus odds on G2. The line movement so far favors that theory, G2 opened at +190 and Damwon at -265.  In some ways, it makes sense. G2 has demonstrated their ability to consistently beat and confound top LCK teams capped off by their recent dismantling of Gen. G. Caps, in particular, looked incredible in the series and it has sparked a debate around whether he should be considered in the “best players in the world” conversation (the answer to that is an emphatic “yes” by the way) and G2 seems destined for another shot at finally overcoming the LPL at a Worlds Final. Narratively, it makes perfect sense. In the real world, I think they’re about to get swept. Each part of that narrative: the talent discrepancy, the LCK dominance, and recent results falls apart under deeper scrutiny of G2 and their opponents, Damwon Gaming.

Let’s start with the talent. Caps is, indisputably in my opinion, a top 8 player in the world. Despite not being the kind of dominant laner we are used to on that list, he is the engine of everything good that G2 does. When you watch their wins, Caps is always involved in the skirmishes that pulls G2 into the lead. He is never late, never indecisive, and seemingly never misses a skillshot. He essentially won game 2 of their Gen. G series by himself on the Sylas. Caps could easily be the best player in this series and I would not be shocked.

The problem for G2 is Damwon has 4 players that I would not be shocked to see as the best player in the series. Canyon, Nuguri, Showmaker, and Beryl all have credible arguments as the best player at their position in the world and  Nuguri and Showmaker have arguments as the best players in the world full stop. They have handily won pretty much every lane they were a part of this season including against players like Zoom, Chovy, and BDD. It’s a scary proposition for G2, who depend on Caps to be able to leave lane to win. If Showmaker puts the kind of pressure on Caps and his tower that we are used to seeing him do, we could see a similar series to their first series against Fnatic in the LEC playoffs in which, G2 seemingly did not have a plan B when Nemesis’ Lucian was keeping Caps cemented in lane. G2 is at their best when they can skill check you in small skirmishes or objective trades, I don’t think they want to do that against Damwon.

Second, the narrative that G2 owns the LCK is true.  They have consistently beat the region at international events over the last 2 years. But Damwon Gaming also owns the LCK this split. The went 34-5 in games in the regular season with a 15% GSPD in the LCK. The other teams that G2 has beaten from the LCK the past two years have been champions, but not the undisputed, never-really-challenged mega-champions that Damwon are. DWG also plays nothing like the slow, macro-focused SKT teams that G2 is famous for confounding. They can play a myriad of styles, but have been at their best when they are the aggressors.  They were, in fact, the best Early Game Rating team on oracleselixir.com in the world during the Summer Split.

Finally, G2’s series against Gen.G was not nearly as dominant as the 3-0 game score suggests. In the first game, Gen. G was at even gold and had three drakes near the 20 minute mark, a commanding position for most competent teams. From there, you really have to just stall until the fourth drake spawns and set up vision properly around it without getting caught out and the advantage you have from the drake stats should help carry you through the teamfight. Instead, Gen. G got desperate and took terrible, unnecessary fights on the top side that led to a G2 baron. It was dumbfounding and enraging as a Gen. G believer. It’s also the kind of mistake that Damwon has not made this split. From there, Gen. G seemingly never mentally recovered and made all kinds of uncharacteristic, dumb mistakes to wind up getting swept. There was one clear theme though: G2 is willing to trade away early objectives to make top side dives or counter jungle. I think if they do that against Damwon they are doomed.

All narratives aside, I believe Damwon Gaming to be the most complete and best team in the world. Their stats are perfect, their win conditions varied, and their talent unimpeachable. I am at a place where I would take them against any team in the world at -250 or better, so that has to include G2.